MBS and RWS to invest $9b in new attractions

In a move that will spur the economy and spice up Singapore's recreational landscape, the operators of the two integrated resorts (IRs) will pump in $9 billion to build world-class attractions including three new hotels, a 15,000 - seat entertainment arena and extensions to Universal Studios Singapore (USS). A fourth tower will be added to the iconic Marina Bay Sands (MBS) development.

Meanwhile, MBS and Resorts World Sentosa (RWS) will be allowed to expand their gaming operations, with their exclusive rights to run casinos here extended until the end of 2030. But their gambling revenue will be further taxed. To tackle problem gambling, the daily casino levy on Singapore citizens and permanent residents will go up from $100 to $150 starting today, while the annual levy is being increased from $2,000 to $3,000.

The $9 billion investment is almost two-thirds of the IRs' initial investment of about $15 billion in 2006. IR operators have been allowed to expand their casinos so that the new attractions can remain commercially viable, but any additions will be targeted at "higher-tier non-mass market players, who are mainly tourists", said the authorities, including the Ministry of Trade and Industry.

If the IRs expand their casinos to the maximum allowed, it will increase Singapore's gaming space from 30,000 sqm to 32,500 sqm. But they are primed to grow non-gaming areas more expansively than their gambling operations.

On Sentosa, two new areas - Minion Park and Super Nintendo World - will be added to USS. The S.E.A. Aquarium will take over space now occupied by the Maritime Experiential Museum, creating a new Singapore Oceanarium three times larger than the existing aquarium. 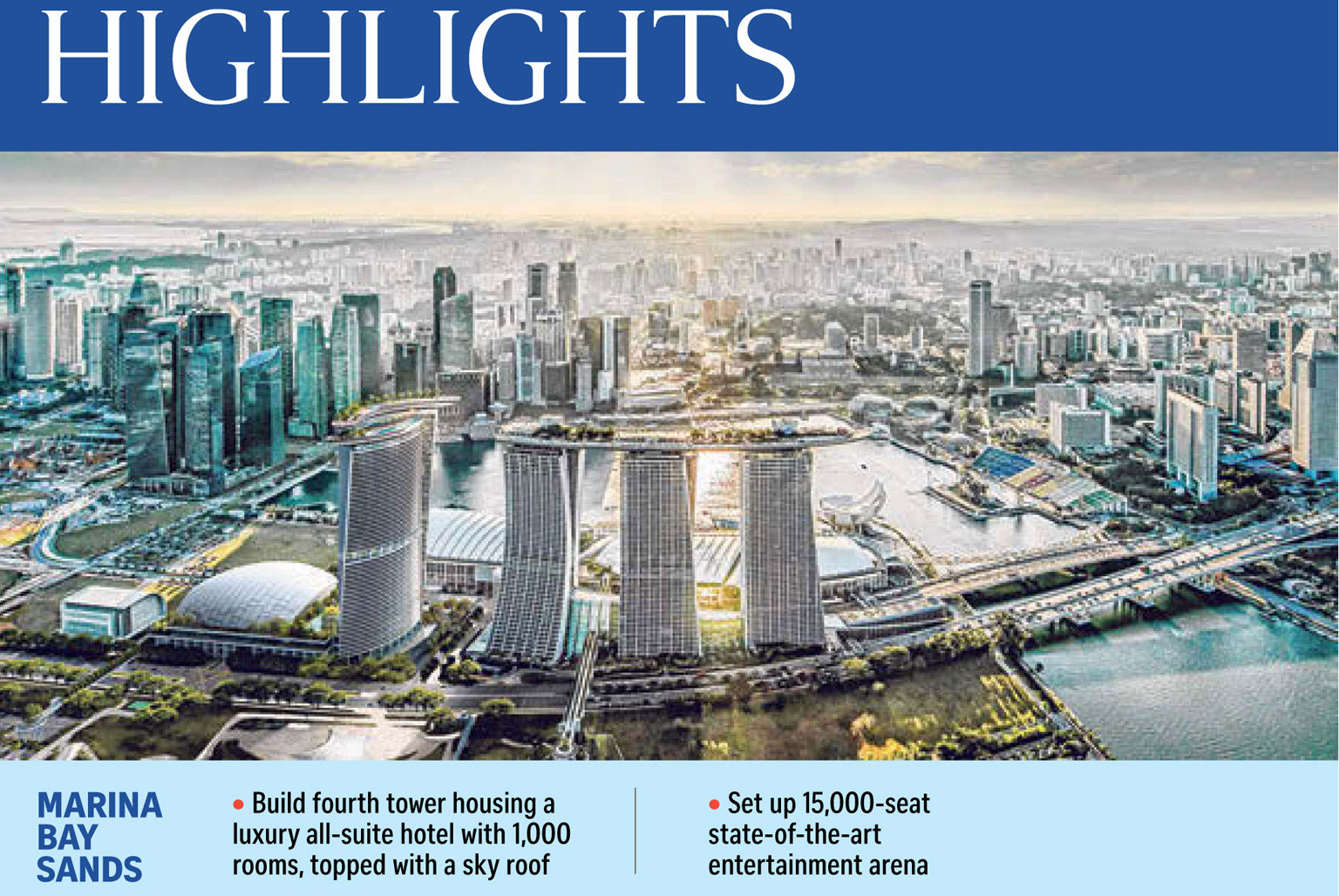 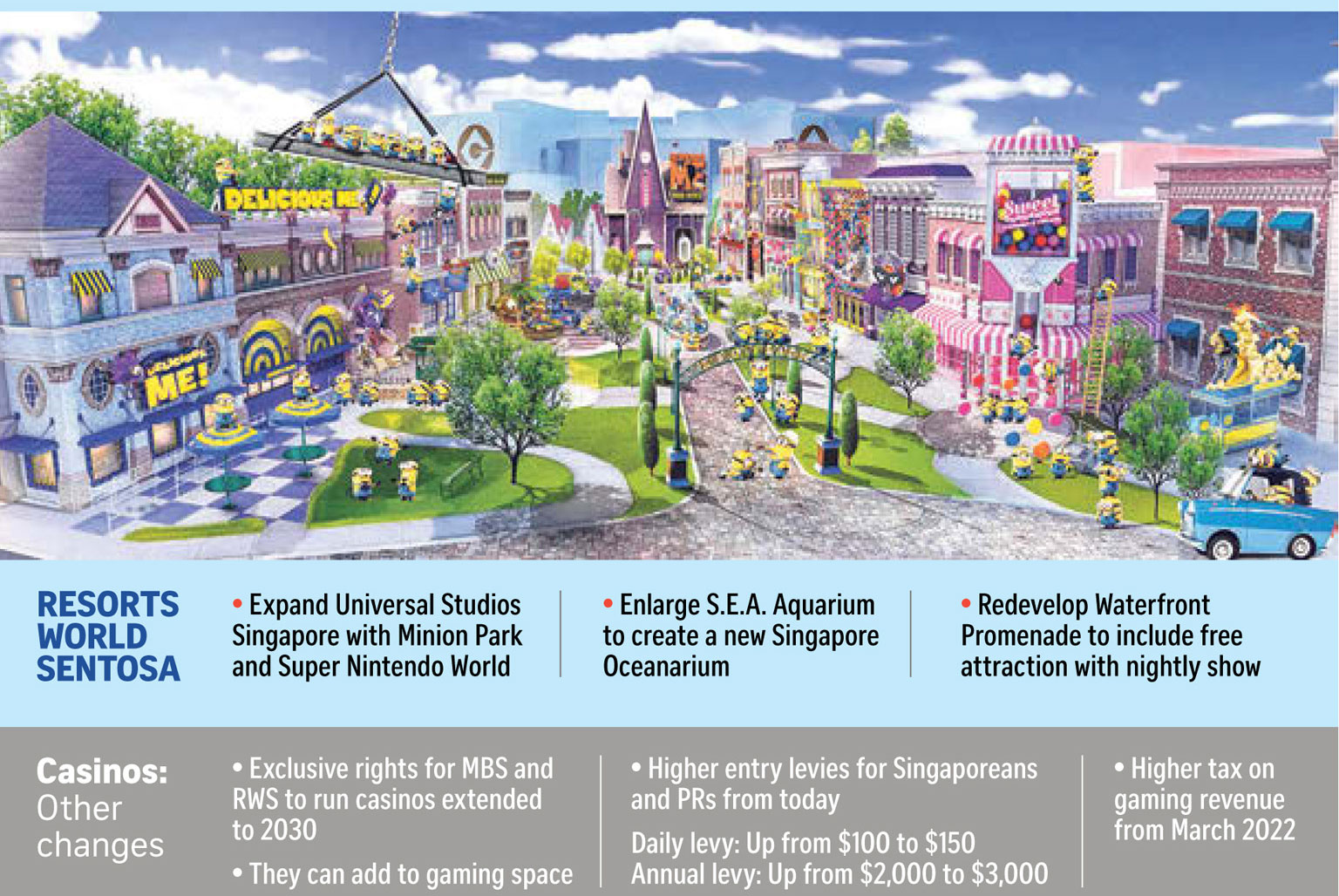 RWS, which is pumping in $4.5 billion, will add more than 164,000 sqm to its gross floor area, expanding it by 50 %. This will include a new waterfront lifestyle complex housing two hotels, retail and eateries.

At MBS, a new 1,000-room suites-only hotel tower will be built adjacent to its existing three towers. It will also spend about $4.5 billion on its expansion, which will span about 3.2 ha of what is currently state land.

Marina One Residences is a mixed development located at Marina Way, District 1 Singapore. The residences by M+S Pte Ltd developer which covers a total gross floor area of approximately 3.67 million square feet. The development will include two 34-storey residential towers, two 30-storey prime grade A office towers and a retail podium. The centerpiece of Marina One called The Heart" will be a sanctuary and green civic space for communities to come together at the heart of Singapore's future CBD.

Anyone who can invest so much with properties they want to be relieved any further tension and look forward to enjoying their latest price. Importantlly in current, amount of apartments for rental and accomodation is not much available, if you wish to visit Marina One Residences Showflat viewing, all you need to do is to schedule an appointment with us via directly call hotline 85338229 or register the form below.

New spaces for meetings, incentives, conferences and exhibitions will also be created at both IRs. The expansions are expected to directly create up to 5,000 new jobs. The IRs currently employs about 20,000 people, about 65 % of whom are locals.

In a Facebook post yesterday, Prime Minister Lee Hsien Loong said that the IRs have been a centerpiece of Singapore's tourism industry for nearly a decade, and their expansion will create more jobs and keep Singapore an exciting place for both locals and tourists. Trade and Industry Minister Chan Chun Sing said the Government has reached an agreement with the IRs that "will keep their non-gaming offerings fresh while limiting the potential downside of the gaming components".

Mr. Chan said that while problem gambling has not worsened since the IRs opened in 2010, the Government is wary of the dangers posed by gambling. It is tightening social safeguards, he added.

Mr. George Tanasijevich, president and chief executive of MBS, said that the IR recognizes the policy considerations behind the increased entry levies for locals and casino tax rates, and accepts "these are changes that need to be made".

"With the expansion of our property and additional offerings we're going to be able to create... we're comfortable with the commercial arrangement we have," he said.

Adapted From The Straits Times