Prudential eyeing move to Marina One

Showflat units of Marina One Residences will be designed by August Design Consultant for 1 and 3 Bedroom and by Axis ID for 2 and 4 Bedroom.

The iconic landmark of Marina Bay consists of 1024 units, situating on 2 blocks of 21 Marina Bay and 23 Marina Bay. 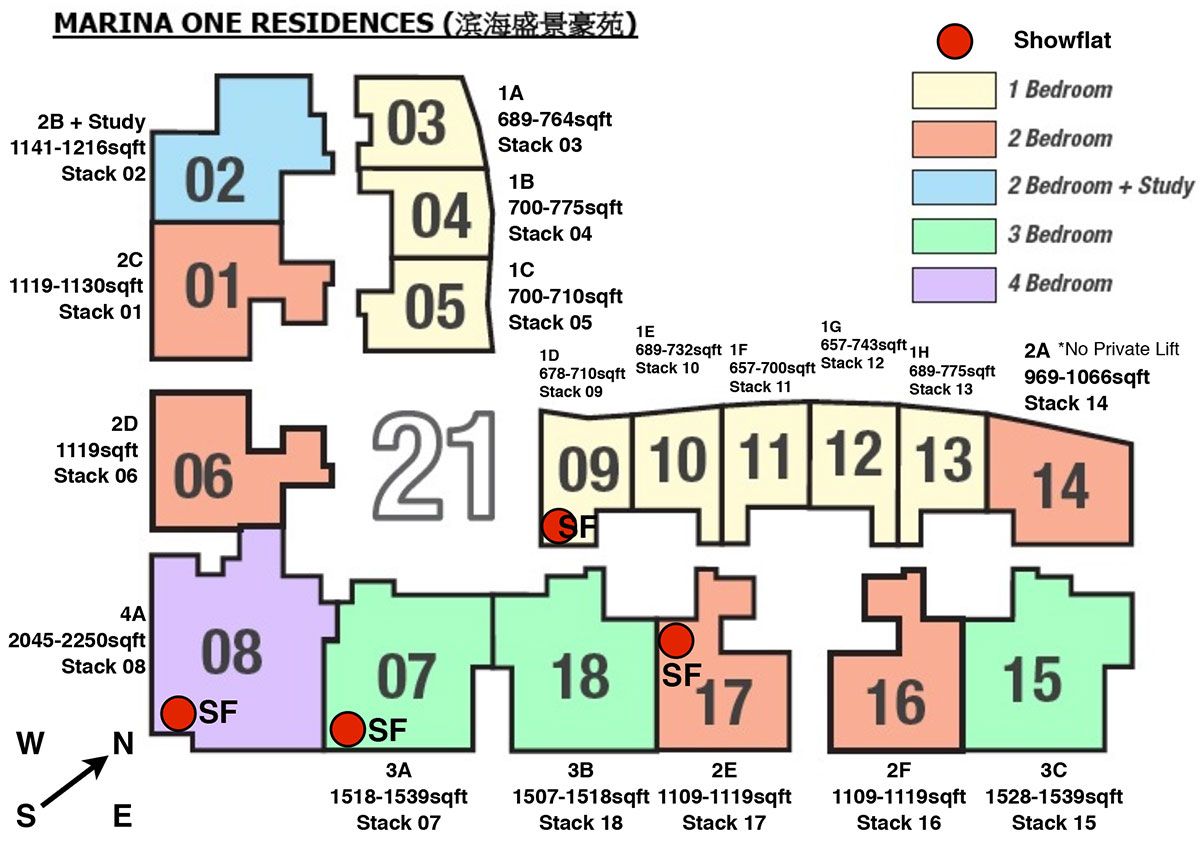 Keyplan of block A4 - 21 Marina Bay with showflat units marked

NEW office projects continue to fuel leasing activity. Word in the market is that British life insurer Prudential is in advanced stages of negotiations for a lease in the low zone of Marina One's East Tower. The exact space may not be finalised yet but could extend up to 90,000 square feet, including a presence at ground level for a customer service centre.

Prudential currently occupies 70,000 sq ft at Prudential Tower, where its lease is said to expire in early 2018. Prudential declined to comment when contacted by The Business Times.

At the new UIC Building coming up at 5 Shenton Way, Japan's leading shipping group Mitsui OSK Lines (MOL) is said to have signed a lease for about 68,000 sq ft across three and a half floors. MOL is expected to consolidate from several locations across the island. It declined to comment.

The first office tenant signed at UIC Building was JustGroup, which will occupy 40,000 sq ft on two levels. A few other leasing deals are said to be in discussions at the 23-storey office tower, which will have more than 280,000 sq ft of net lettable area (NLA) office space and is expected to receive Temporary Occupation Permit (TOP) in the first quarter of next year. The average gross effective monthly rental at the new UIC Building is said to be close to S$8 per square foot.

It will be part of an office and residential mixed development project on the former UIC Building site. The residential component, named V on Shenton, will have 510 apartments in a taller tower that is slated to receive TOP in the second half of 2017.

As for Marina One, other recent tenant names being mentioned in the market include Olam, which is currently at Suntec City, and JustGroup.

Earlier-reported tenant names at Marina One include The Bank of Tokyo-Mitsubishi UFJ (BTMU), which has leased 140,000 sq ft over three and a half floors, and PwC, which is believed to be taking a lease for around 180,000 sq ft.

Swiss private bank Julius Baer has leased the development's 104,000 sq ft Level 28, which spans the East and West towers. This is one of two high-density floors in the Marina One project.

BTMU will be exiting Republic Plaza, PwC will be leaving its current location at 8 Cross Street and Julius Baer will be vacating its space at Asia Square Tower 1.

Savills executive director (commercial leasing) Marcus Loo noted that rentals have dropped to a level where tenants are beginning to appreciate and justify relocating vis-a-vis a lease renewal at their existing premises. "The bulk of leasing activity is a flight-to-quality movement to new projects with little expansion in the physical area take-up of space.

"That said, even if a tenant leases the same amount of space in a new office development, it should be able to house more people, thanks to bigger and more efficient floor-plates - resulting in a saving of circulation space and duplication of common facilities."

About 3.5 million sq ft of offices are being completed in 2016 and 2017 - at Guoco Tower (which received TOP last month), Duo, Marina One and the new UIC Building.

Moray Armstrong, managing director of advisory and transactions at CBRE, noted that most of the big pre-leasing activity over the the past few quarters has been done at rentals which are at support levels.

"The bulk of the best deals from a tenant's perspective have already been done, and we are starting to see selectively a few examples of developers testing higher rents.

"The office rental recovery, when it comes, will be led by quality, Grade A Core CBD buildings - though there will be some residual downward pressure that may impact some older-generation Grade B buildings in the CBD" that are expected to see vacancies rise from mid-2017 onwards as tenants move to the newly-completed projects.

The challenge in backfilling such space in older buildings may impact the prospects for the Grade B segment in the mid-term; in such a scenario, a rise in islandwide office vacancy rates seems inevitable, he added.

A commonly-held view about the Singapore office market is that things will improve from 2018 when the current supply bulge would have been absorbed, with very limited new office supply in the CBD between 2019 and 2021. But this view may be starting to lose currency.

A seasoned office agent who declined to be named said: "We may be headed for another big wave of completions in 2019-2021 to the tune of more than two million sq ft - from redevelopment projects such as Golden Shoe Car Park, CPF Building, Funan, Afro Asia Building and Park Mall and not forgetting the brand new development on a greenfield site along Central Boulevard on offer at an Urban Redevelopment Authority tender that closes next month."

"We're staring at a scenario of no growth in employment or population, so unless the government comes up with some plan to boost the economy, we'll likely continue to see people moving from older buildings to new buildings with not much net increase in demand. I do not know where new demand will come from to backfill the space that will be vacated in older office properties from next year onwards."